Marking a Milestone: The CRC Turns 30 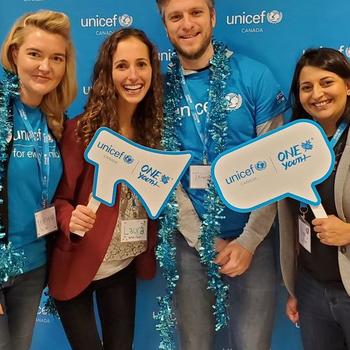 This November 20th, the IICRD team celebrated the 30th birthday of the United Nations Convention on the Rights of the Child (CRC) - a legal instrument which Associate Manuel Manrique calls an “ethical and moral standard that transformed our relationship with the world's children.”

In his column featured in Colombia-based newspaper El Mundo, Manrique reflects that there has been three decades of significant progress in many areas, especially with respect to child survival, health and educational coverage of children and youth. Yet, he notes, we must consider the “challenges resulting from the recent evolution: digital revolution and its consequences on children, climate change, emergencies, migrations, worsening inequality that falls with double force on children and girls, to mention the most pressing.”

These perspectives were echoed loudly in a Youth Action Summit hosted by OneYouthCanada and UNICEF. IICRD’s Angie Mapara Osachoff and Laura Wright facilitated alongside youth activist Samantha Walsh to support youth at UNICEF's National Youth Activism Summit in Toronto to learn about child and youth rights through participatory activities (see photo above).

“I felt incredibly grateful to spend World Children’s Day with youth activists that are pushing for and creating change,” says Wright. “Youth are telling us that: ‘We refuse to believe we deserve anything less than human rights.’ As child rights advocates we have a vital responsibility to listen to, foster space for and amplify the wisdom, ideas, and actions of these inspiring activists.”

Across Canada, IICRD’s Elaina Mack, Kathleen Manion and Valeria Cortes also spent time with hundreds of young children to celebrate World Children’s Day in three Victoria-based elementary schools in British Columbia. Through puppets, art and games, children learned about their rights and how to respect them - whether on the playground or at the kitchen table.

“These playful activities created the space for deeper-level conversations,” says Cortes. “It was impactful to hear conversations between children about when their rights were not respected, especially in the case of their peers fleeing to Canada from war-torn countries. This was an eye-opening experience for children and laid the foundation for embedding rights discussions into classrooms.”

With our organizational roots grounded in the CRC, the most ratified agreement in history, IICRD will aim to boost our efforts in this next decade to collaborate with allies and take the lead from young people to use the Convention as a tool for positive transformation.

As our wise friend Manuel Manrique advocates: “The Convention must be strengthened, in every possible way, as a factor for the strengthening of our democracies and the construction of conscientious and participatory citizens, capable of facing the challenging era we are now living.”