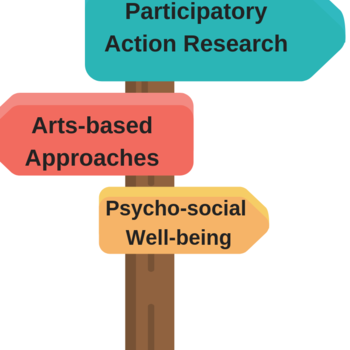 “The arts offer a real opportunity to empower young people to express themselves, share their thoughts and ideas, play a meaningful role in their communities and create positive social change.” –Vanessa Currie, IICRD Executive Director

IICRD's Sam Redmond, a University of Victoria student placement student, interviewed Vanessa Currie about her recent experience engaging young people in Egypt through YouCREATE. Tap into their conversation to explore stories about the intersection between arts-based approaches, participatory action research and psycho-social well-being.

YouCREATE is a program created in partnership between Terre des Hommes and the IICRD to enhance young people's psycho-social well-being through the intersection of participatory action research (PAR) and art initiatives.

The essence of PAR is important, as both the researchers and youth involved are working together to better understand the world around them and how they can create social change. This ensures that the participants will be benefitted through their participation, as they help construct the goals that they would like to achieve. PAR pairs with the goals of the IICRD of youth-led programs, building action-based research grounded in the young people's ideas, and it allows for the participants to build skills that empower them through designing and implementing arts-based projects to meet their needs. This opportunity allows for the highest level of meaningful participation, including providing both young women and men with skills and resources to build their confidence to make a positive impact in their communities.

“I worked in Egypt and on the first day of one of the program sessions I recall the girls being very shy. For many of them, it was the first opportunity they have had outside their homes to participate in this way. The girls did not have a lot of self-confidence upon our first meeting; however, that changed.”

Who is YouCREATE for and how does it work?

The IICRD uses YouCREATE to give structure, outlets, and empowerment to young people in order to explore (through the arts) well-being. Through the PAR process combined with arts initiatives, it not only gives youth the space to explore their well-being, but it gives them the opportunity to define what well-being means to them and how to practice it on a day-to-day basis.

“The group was asked to explore the overarching idea of what ‘well-being’ means to them.”

What is the importance of focusing on psychosocial well-being?

Each culture creates its own unique core elements that outline what well-being looks like to them. Overall, the interaction between psychological components (such as thoughts, emotions, and actions) and our social experiences (as in our relationships, environments, and culture) are emphasized in how they affect our well-being – creating the ‘psychosocial well-being’ framework. The psychology and social side of well-being affect each other, which means that making sure both sides are receiving positive feedback allows for well-being to thrive.

It is clear then that every culture may create a different definition of what well-being looks like to them and from this, the IICRD takes to heart the value of building from strengths in order to combat creating a check list that may diminish qualities. Instead, IICRD focuses on engaging young people to identify the politive qualities of well-beng that most resonate with their culture.

How is YouCREATE impacting young people?

As it can be hard to always express how we think and feel with just words, YouCREATE has allowed youth to express themselves and their complex thoughts through various mediums. By giving them other ways to communicate in safe ways, YouCREATE empowers young people to be heard, conveys their messages, and continues to let them explore and practice psychosocial well-being.

With the ‘spirit, heart, hands, and head’ principle held by the IICRD, YouCREATE embodies ways in which these four aspects can provide a pathway to create the most positive and effective form of psychosocial well-being for the participants in their specific culture.

So far, YouCREATE has allowed the youth participating to express themselves through the arts, to value themselves and their psychosocial well-being, to explore what well-being means to them, and how they can practice, lead, and inspire others in positive and engaging ways.

“No one was asked to speak specifically about themselves, but rather, they were asked to explore ‘well-being’ in terms of their peer’s well-being. This aspect started to create cohesion of community. The youth felt and built safety within the group and through this, explored well-being together and what it meant for all of them instead of just themselves.”

“After 4-5 months in the program, the young people gained experience in leading and facilitating the PAR process with their peers. They gained confidence that was gathered through this process and they reported that this positively impacted their well-being.”

Go to our project page to learn more about YouCREATE activities.