Children on the Move: IICRD Contributes to CRAN 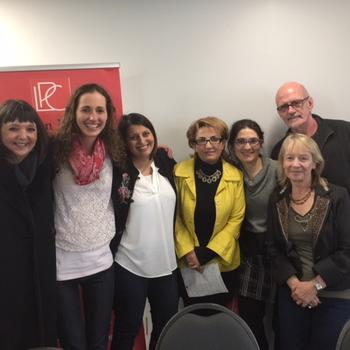 “What is it like for a child to be a stranger in a strange land, where everything is different, including the weather? As you try to make your way in a new language, a new community, a new school, how does it feel? … How do you learn that you actually have rights because you are a child and all children have rights? And who is there to help you, protect you, provide for you, hear what you have to say?” – Landon Pearson, former Canadian Senator and child rights advocate

These questions were explored during the 2018 Child Rights Academic Network's (CRAN) annual meeting, focused on Children on the Move. The 2-day meeting held in Ottawa, Canada on February 2-3, 2018 was hosted by the Landon Pearson Centre for the Study of Childhood and Children's Rights at Carleton University.

Many International Institute for Child Rights and Development (IICRD) Associates as well as a staff and Board Director contributed to the gathering – which brought together a broad network of academics, advocates, children's rights and legal experts together from across Canada, the United States and the United Kingdom. Representatives included: Gerison Lansdown, Laura Wright, Angie Mapara, Ziba Vaghri, Natasha Blanchet-Cohen, Sue Bennett and Micheal Montgomery.

A key component of the event focused on reporting back on key issues, insights and ideas emerging from Shaking the Movers, an annual youth-driven and youth-led workshop held in different regions across Canada. Associates Natasha Blanchet-Cohen and Laura Wright shared highlights from young people in Quebec and British Columbia related to the theme of displaced young people. In British Columbia, facilitators chose to reach out to participants outside of the greater Vancouver area to explore the impacts of the summer fires on children and youth in the Williams Lake area.

“The town was on evacuation alert. We packed, and unpacked, and repacked and then we were evacuated. My family was all over the place. It was stressful until we were all together again.”  - Youth representative, Shaking the Movers, British Columbia Report

Cross-cutting issues were also explored in focused panel discussions.  IICRD Associates Sue Bennett, also Professor of Pediatrics at the University of Ottawa as well as Ziba Vaghri, Director of GlobalChild with the University of Victoria presented on the importance of provision rights (e.g. Education, health, basic material needs). The rights of children to participate in decisions affecting them was explored in another panel featuring IICRD Associate Gerison Lansdown, an international child rights consultant as well as Associate Laura Wright, currently a Doctoral Candidate at the University of Edinburgh.

In her presentation, Vaghri highlighted key concerns raised by Shaking the Movers participants, discussed international commitments to address them, as well as urged CRAN participants to urgently advocate for more support for children on the move.

“We need to put education at the center of humanitarian responses,” urges Vaghri. “The costs are significant. In Syria alone, the loss of human capital through lost education due to the ongoing crisis was estimated at US$ 11 billion. 11 billion is 18% of Syria’s GDP! Further, more than 75% of children on the move experience a horrendous journey until they arrive on a safe shore. We must deliver more.

Placing the newly arrived children in an education system that is non-responsive to their needs can also be costly. Provision of an education that is fit for the needs of these immigrant and refugee children is important - such provision is not only the duty of the host countries under the Convention on the Rights of the Child but also critically important to their economy and sustainable development.” - Ziba Vaghri, Director of GlobalChild with the University of Victoria and IICRD Associate

Visit the Child Rights Academic Network for more information about this gathering, including upcoming reports and presentations from Shaking the Movers.