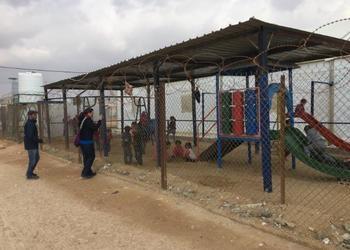 From a March, 2017 article in El Mundo newspaper of Colombia, where Dr. Philip Cook of the IICRD shares his experiences of the importance of play and sport for children.

The interview was in Spanish, but an English translation can be found below.

Philip Cook is the Executive Director of the International Institute for the Rights of Children and Development, a Canadian NGO working in conflict zones around the world to help children and promote the right to play. In an interview with EL MUNDO, Cook explained the importance of play and sport to reintegrate children into society and heal the trauma of wars.

How did this interest and commitment for children's rights arise?
I think one of the things that initially motivated me and continues to motivate me is that we live in a period when there is more youth than ever before. Approximately 30% of the population is children. People see them as vulnerable beings so they need to be supported and protected, but we also have to think about how they can contribute to current challenges such as global warming, migration or conflict. Today, our challenge as adults is not just to think how to save children but how children can save us because they have skills that we do not have as adults.

The UN Convention on the Rights of the Child has a strong influence on your work. How do you apply your values ​​to specific projects?
The Convention is a legal artifact created by human rights lawyers but represents our values ​​as a human family. It represents the starting point of our work. For example, seeing the values ​​in Colombian society that can be linked to human rights. I can cite three examples: the importance of human dignity, human relations with others and justice, not only in courts, but also the fact of being fair, equality.

After 25 years working for children's rights, what are the most relevant projects being carried out?
We have different kinds of projects but one focus that we have integrated into all of our community development projects since the beginning is supporting the participation and active engagement of children and youth. It is important to listen to them but not just listen: you have to think about how to concretize what they say in terms of changing things. It is about listening and acting. Another relevant focus is the protection of children, which involves identifying the most vulnerable young people and bringing their experience to the center of social policies. This affects displaced populations in particulare as they often have no say in local decisions but also children affected by conflicts, child abuse, and the exploitation of young people.

Why defend the right to play?
First, you have to understand that play is not frivolous. As adults, we often find that playing is not as important as school or work. Individuals learn to adapt to many situations through play. If you pay attention to how children use play, you can see that it helps them to explore the world around them, socialize, learn about human relationships through their imagination or interaction with others. In our experience, we have noticed that for children who have gone through difficult situations, playing can be a way to make sense of these experiences and to understand them. In some places children can not play; due to  land mines or the restriction of spaces i.e. in refugee camps. In these cases, it is importnat to try to give them those spaces. A focus on sports is also beneficial. Football can be a good opportunity for young people to learn self-discipline or teamwork.

You had the opportunity to travel to many refugee camps that fled the war. In your opinion, what are the direct and long-term effects of conflict on children?
Today children are more affected by wars than before. Taking the example of Syria, schools and hospitals are deliberately targeted by the attacks. Children are increasingly being targeted in wars because they affect the entire population. Another problem is child soldiers, sexual violence against girls, and displacement. Civilians are the main victims in war. As is the case of Colombia, they can not simply return to their homes when the conflict is over but they have to move to other parts.

How would you define the situation of Syrian children in refugee camps?
First it is necessary to mention the terrible situation of those that are inside Syria. I think there has not been a crisis like there is in the history of humanity in terms of cruelty. It is interesting for us to work with Syrian children and their families in Lebanon and Jordan.  The experience of the war was terrible, they went through things that we can not even imagine: getting up in the middle of the night because your neighborhood was poisoned with gas, going to school and being bombed. Now they suffered from being displaced and social isolation and discrimination. This is something we can change. Sport and play can positively change the vision of local youth towards their Syrian peers, create more space in schools and economic opportunities so that refugees are not just a burden in society. They could bring dynamism.

How would you rate the situation of children's rights in Colombia?
Colombia is a country where there have historically been many challenges in terms of children's rights. We will be in Chocó next week and there have been many violations as part of the conflict. More recently, Colombia has been a very progressive at the national level. I have been working with the Government on children's issues and compared to the rest of Latin America, Colombia is has very progressive policies with regions and cities like Medellín and Bogota showing tremendous progress in making these policies a reality. All of Colombia also has a very active society and associations.  The peace process is an opportunity to see how cooperation between different levels of power can be carried out to promote good actions. We are working with a group in Bogotá, the Ayara Family, which uses hip-hop, graffiti to build peace and keep young people out of gangs and drug trafficking. It is more effective to build dialogue between young people than between young people and adults who belong to the authorities. They prefer to talk to their peers, who have much more influence.

Now that the peace process is being carried out, what are the keys to the social reintegration of FARC children?
That is very difficult. We worked in other societies such as Sierra Leone where children were both victims and instigators of violence, so it was difficult to reintegrate them. Young men in particular have encouraged violence. It is not so simple. Reintegration is key in this process,  providing opportunities for people who did not have the opportunity to go to school but also a process of reconciliation.

Although the FARC are in the process of dropping arms, there are still other criminal groups in which there are also children. How could the authorities not leave them aside?
It is about providing opportunities for young people, particularly boys, to have access to the labor market so that they do not fall into criminal activity. We are working with Commune 13, in which some boys were able to say "no" but others were killed if they rejected a gang proposal. We have to claim those civic spaces and I know that here in Medellin there are social initiatives to reclaim communities. Surely a judicial perspective must be added to address the bands. However, it is important not to have preconceived ideas about the daily life of people,

Syria is in a terrible situation but, have you considered future projects with Yemen?
Maybe. We are a small NGO. We were interested in including the Yemenis in our study for the United Nations High Commission for Refugees Report (UNHCR) but we did not have the resources to do so as we are focusing on 5 regions. We chose Syria instead of Yemen because it is suffering a more urgent crisis, but in the future we could work with this other country.

You mentioned you also have projects in Canada with First Nations. How are your actions carried out in your country?
Many of the innovations in human rights came from the west, in part because colonization began in the east, moving westward. That implied that when British authorities arrived in British Columbia, the Indigenous People were more sophisticated, allowing them to sign treaties. There is much more resistance in the indigenous communities of the West where they are negotiating with energy companies. They used the Canadian constitution, in which the idea of ​​community is very important, to defend their rights, to reclaim their lands and to have decision-making power in relation to energy projects to be carried out in their regions.

IICRD also supports the involvement of children in environmental protection, how can children do this?
They can be involved in different ways. Personally I am skeptical that politicians can solve the huge environmental problems or bilateral cooperation in the way the policy works. In the end, I think it is the citizens themselves who will find more direct solutions with effective ways of using water, or facing floods or droughts. Young people are interesting as climate change effects then. They are using social networks to mobilize people and change things.